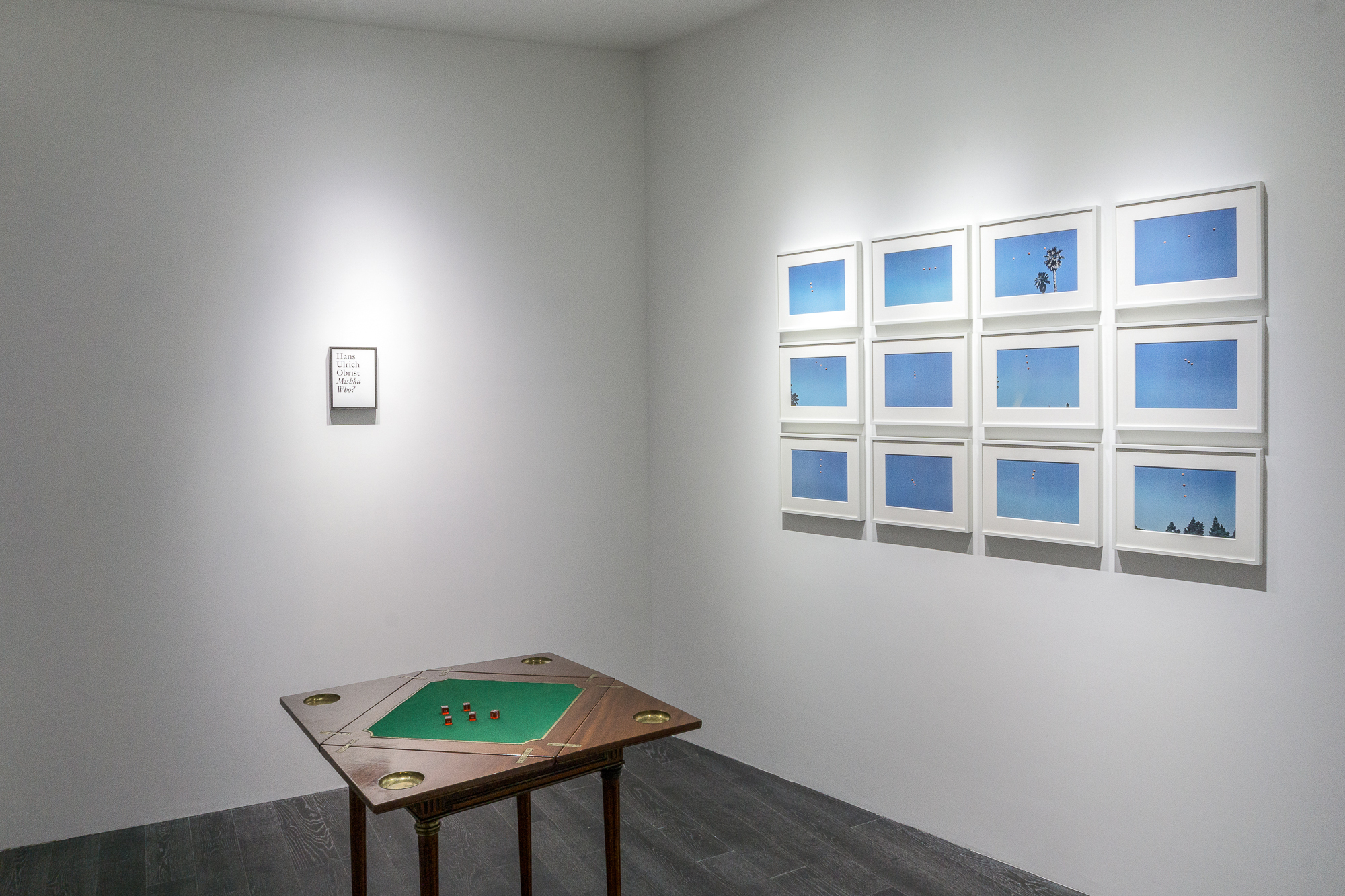 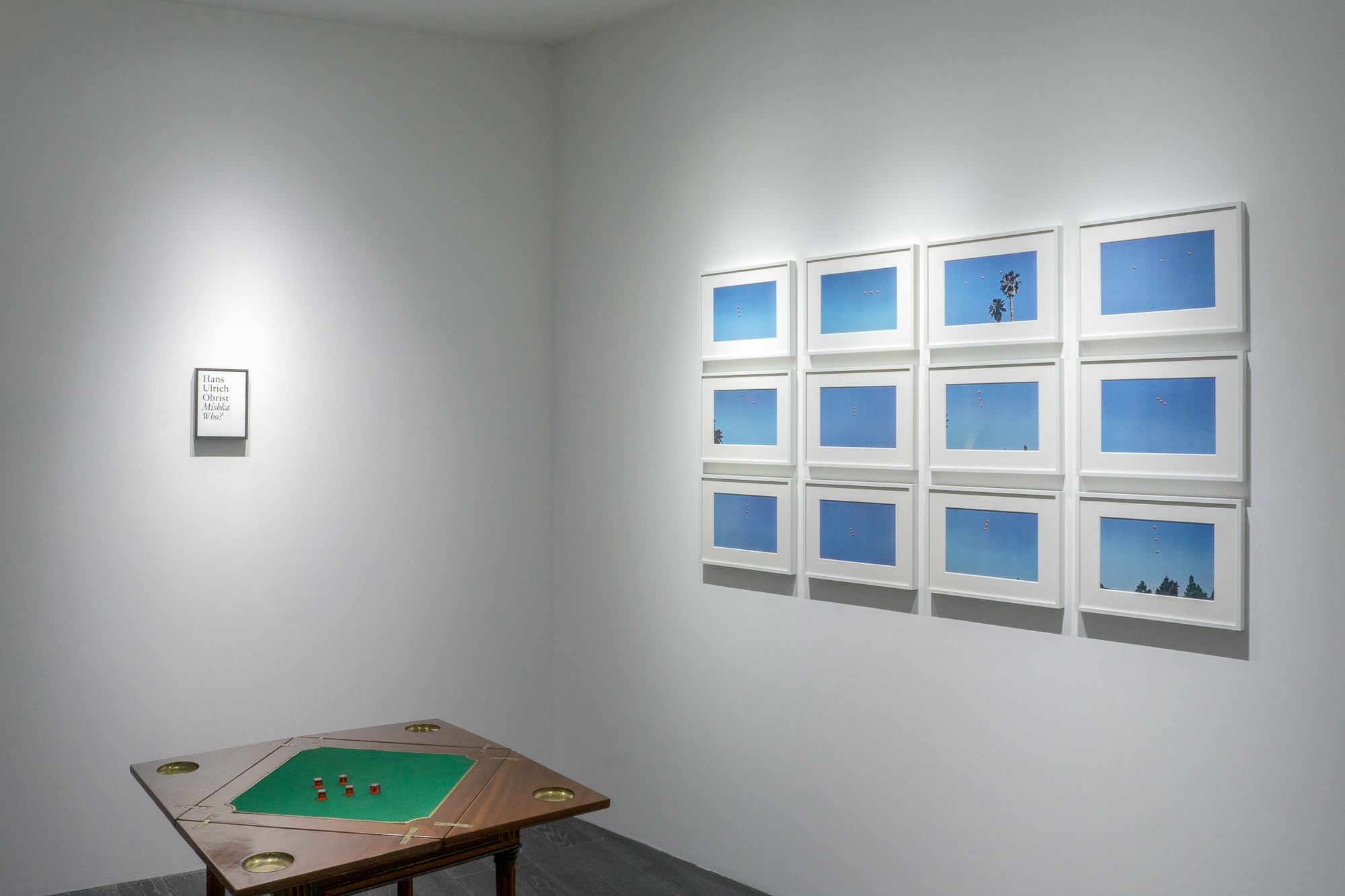 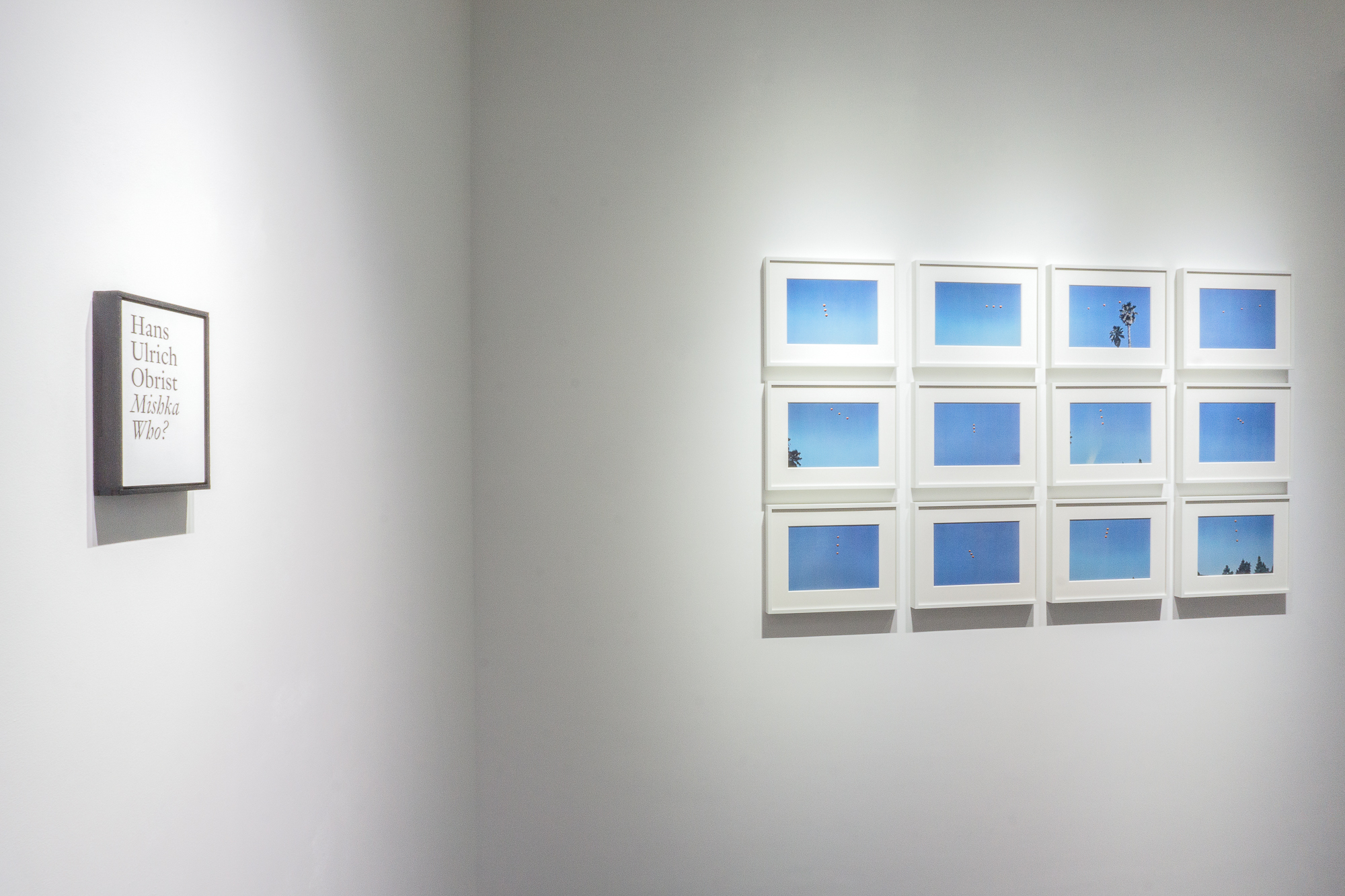 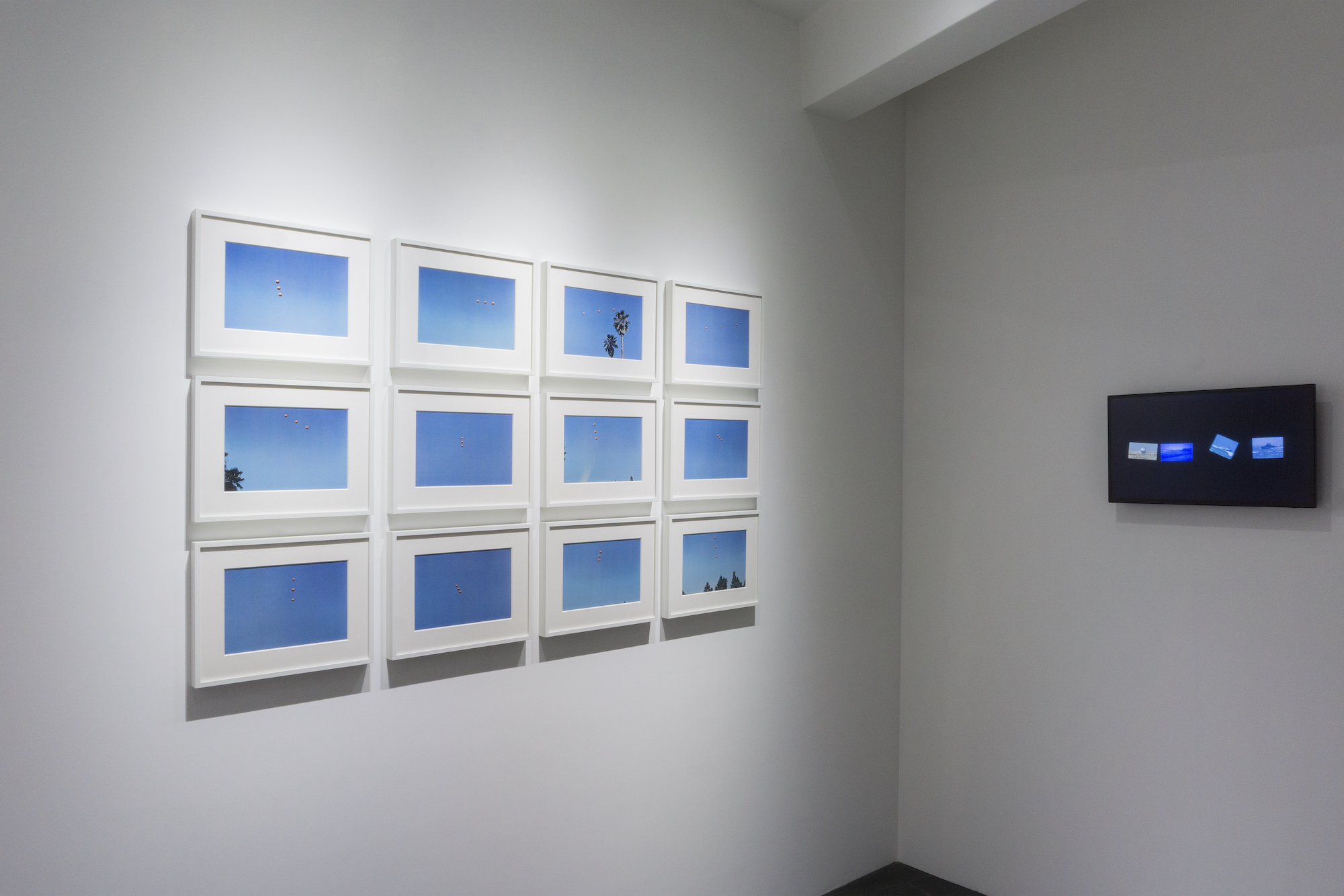 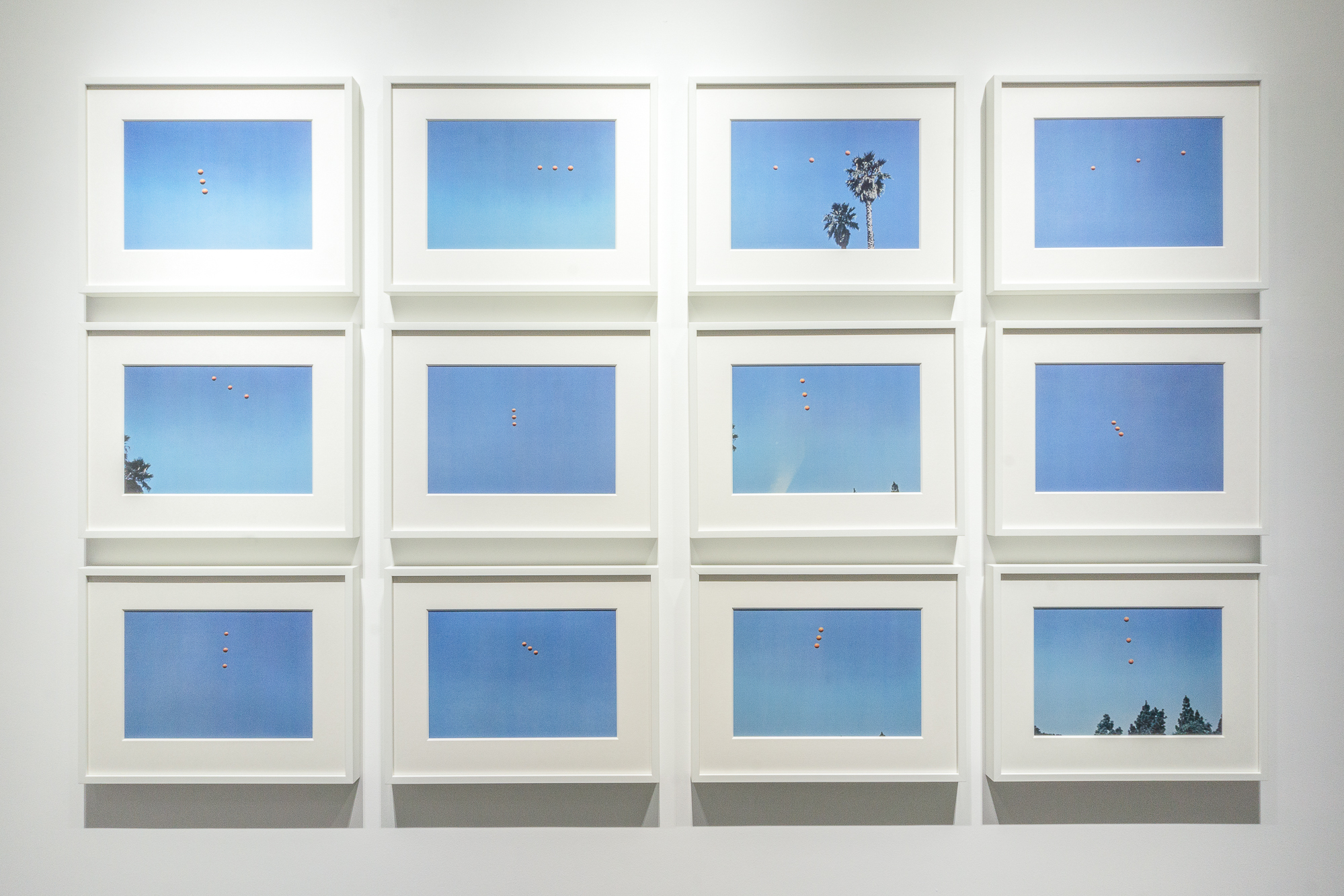 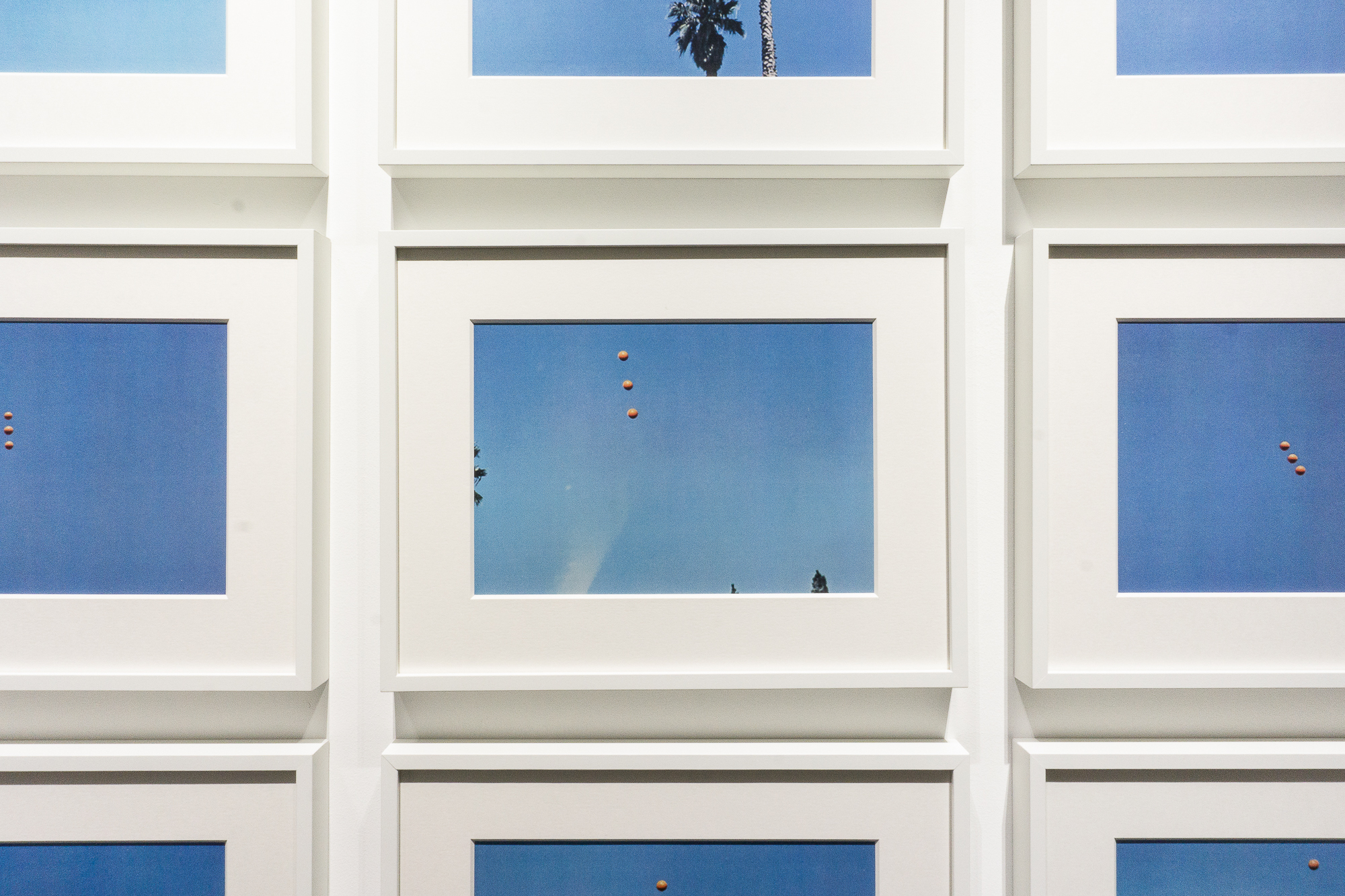 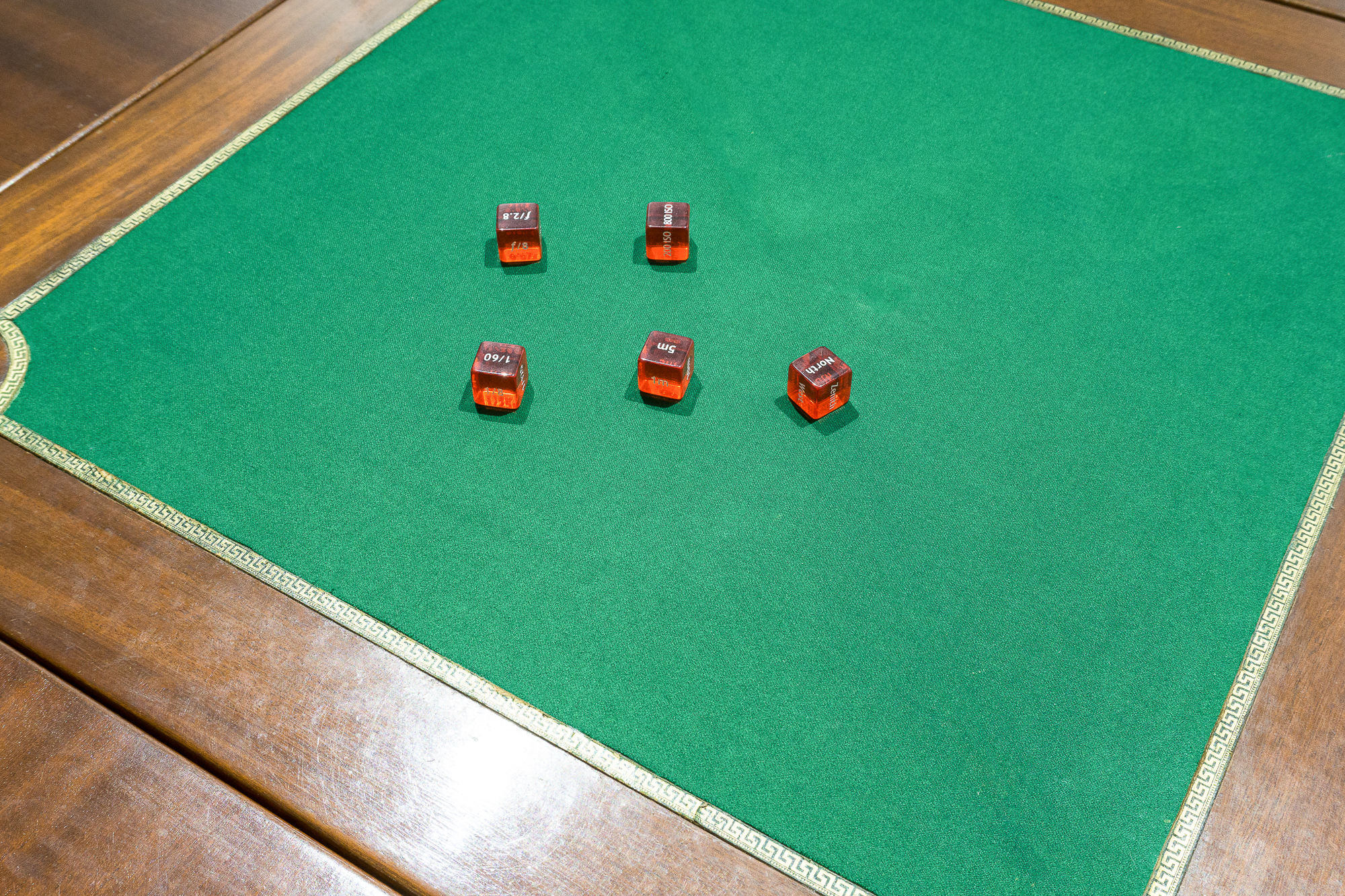 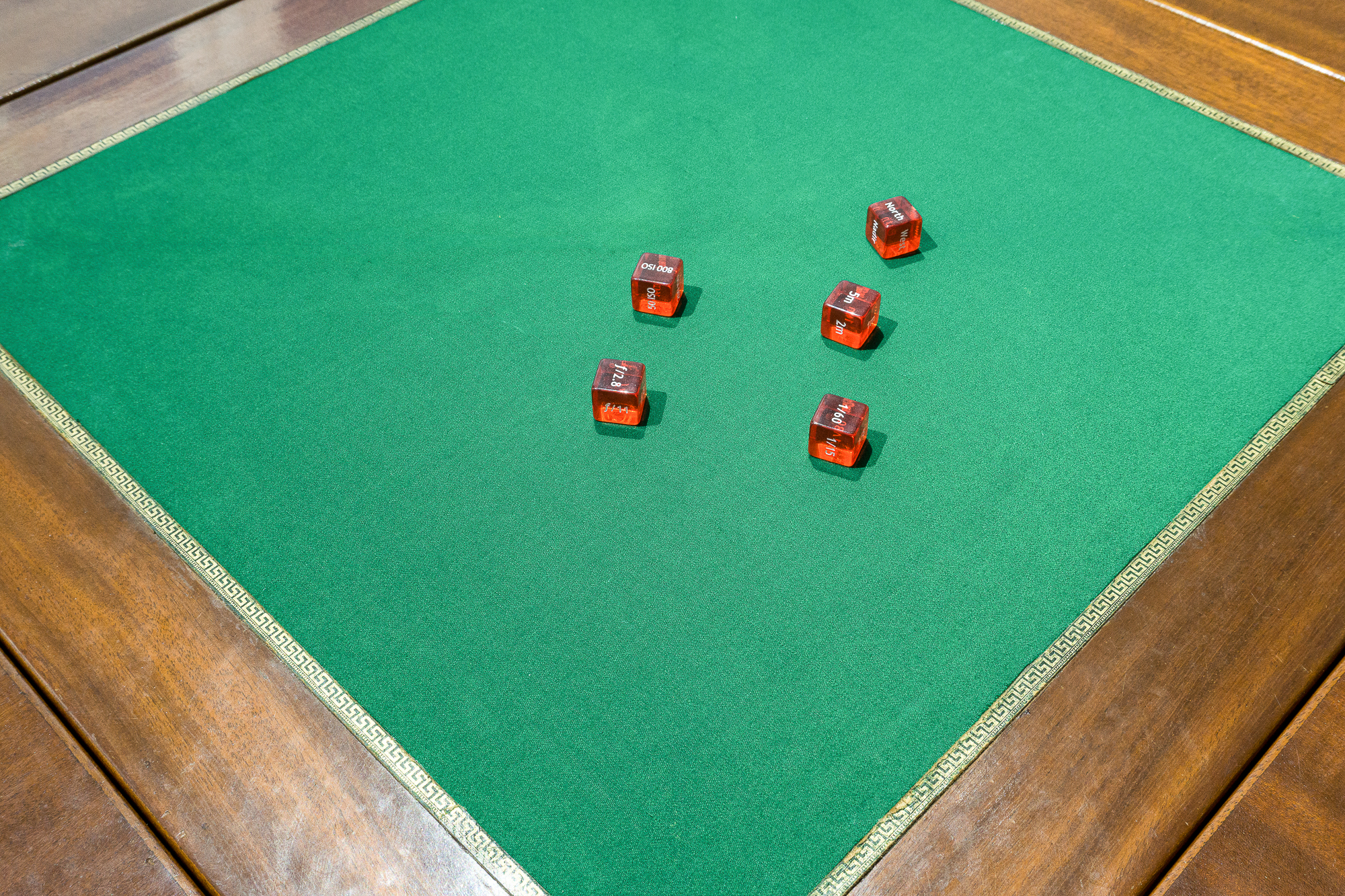 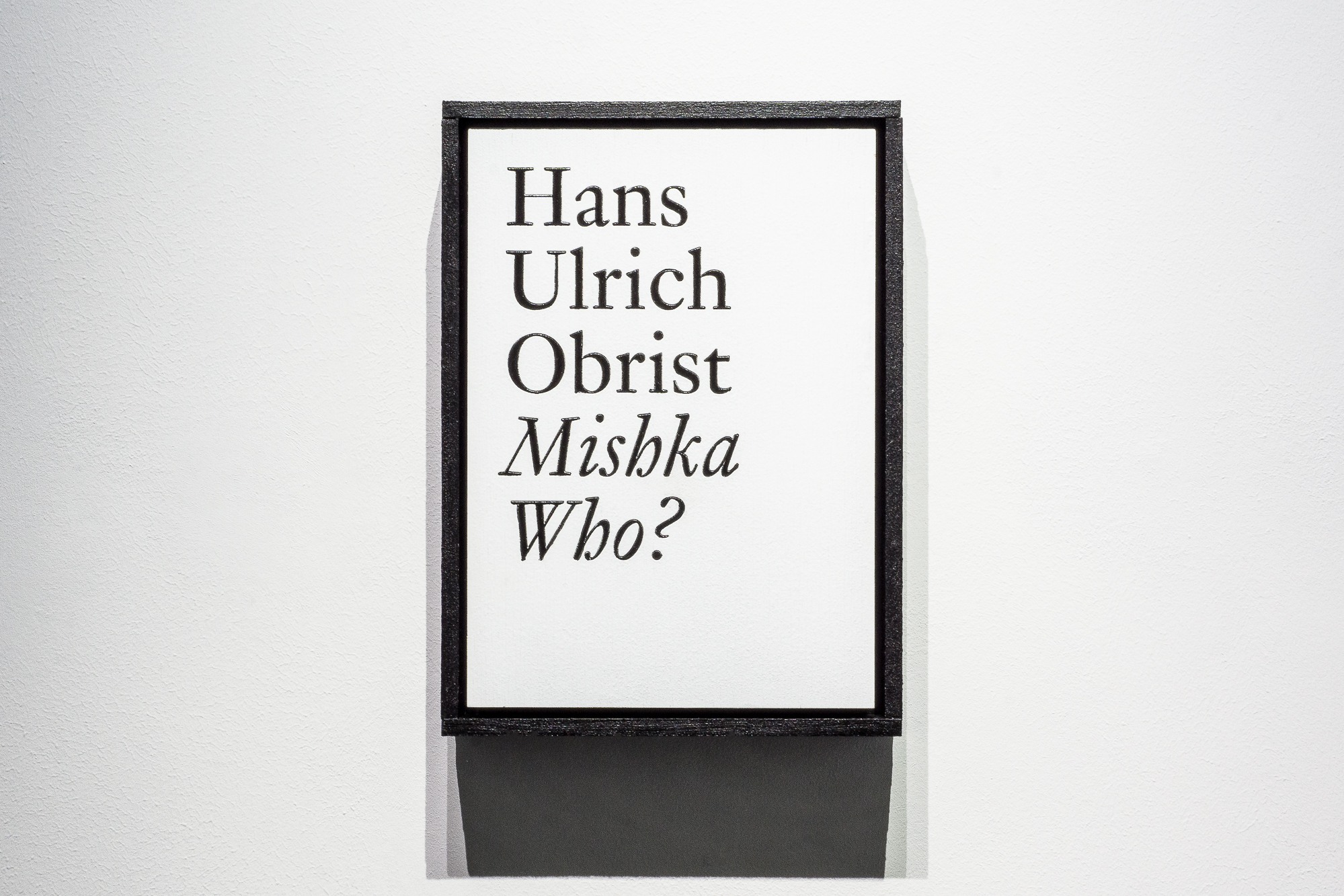 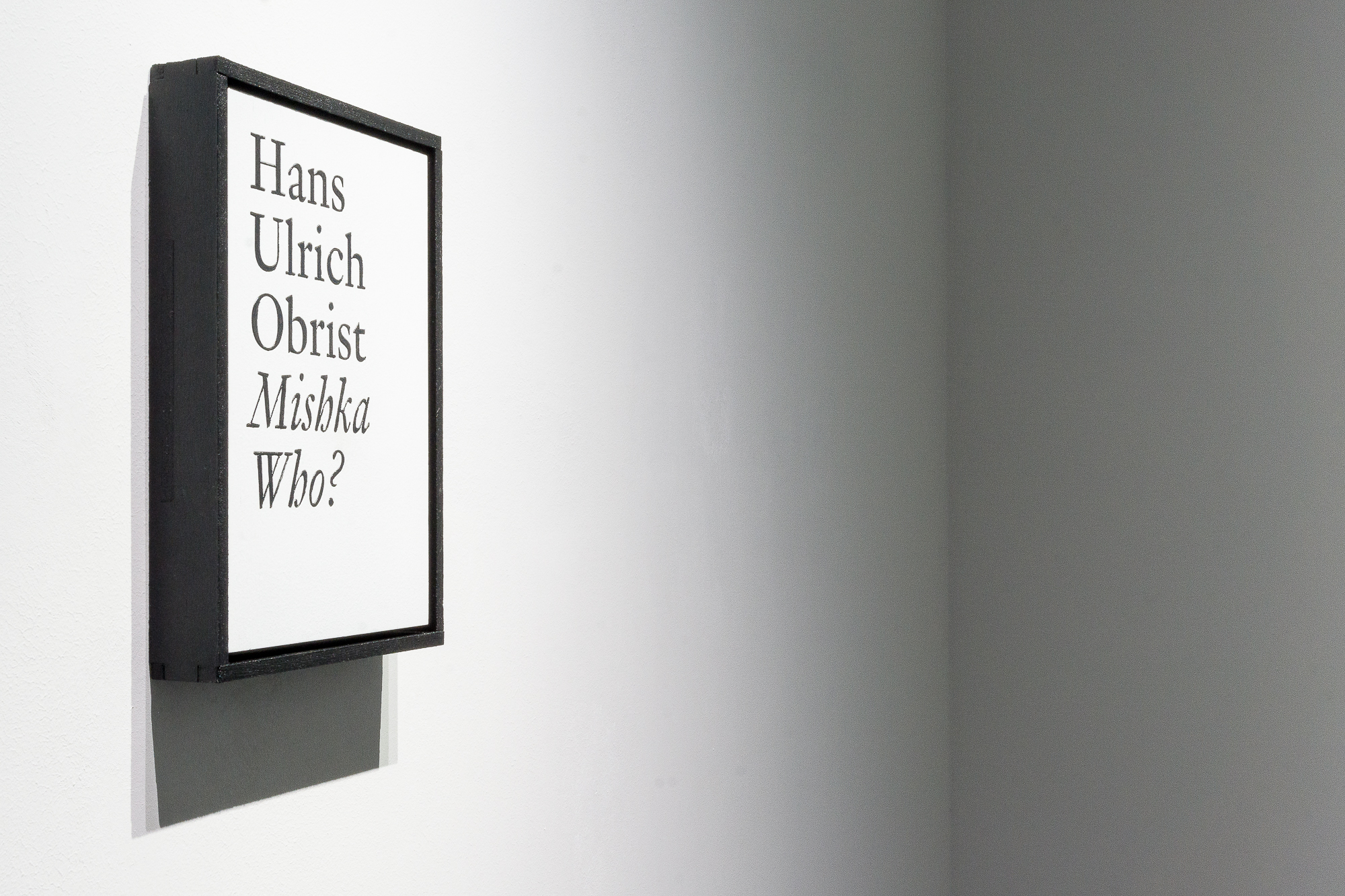 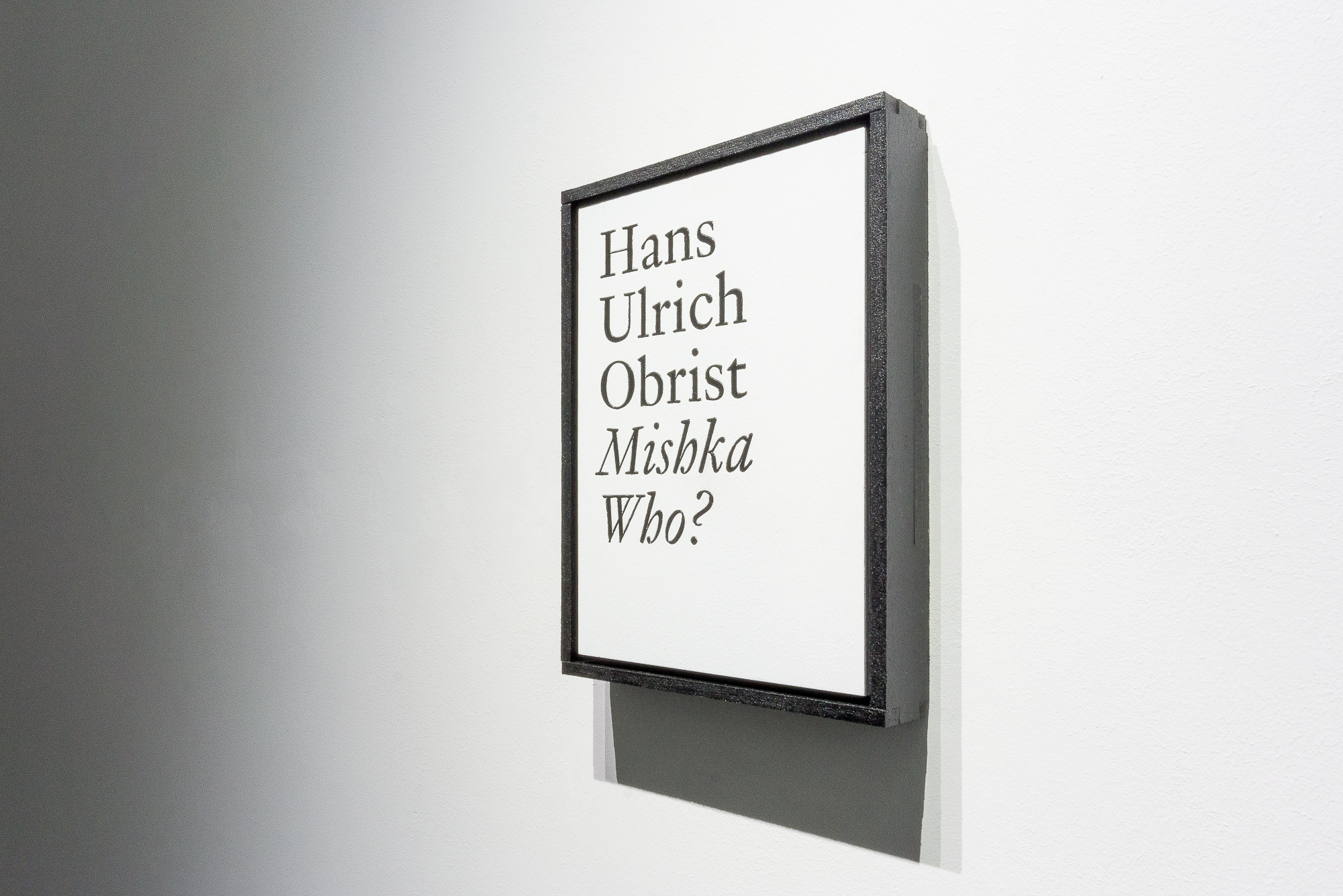 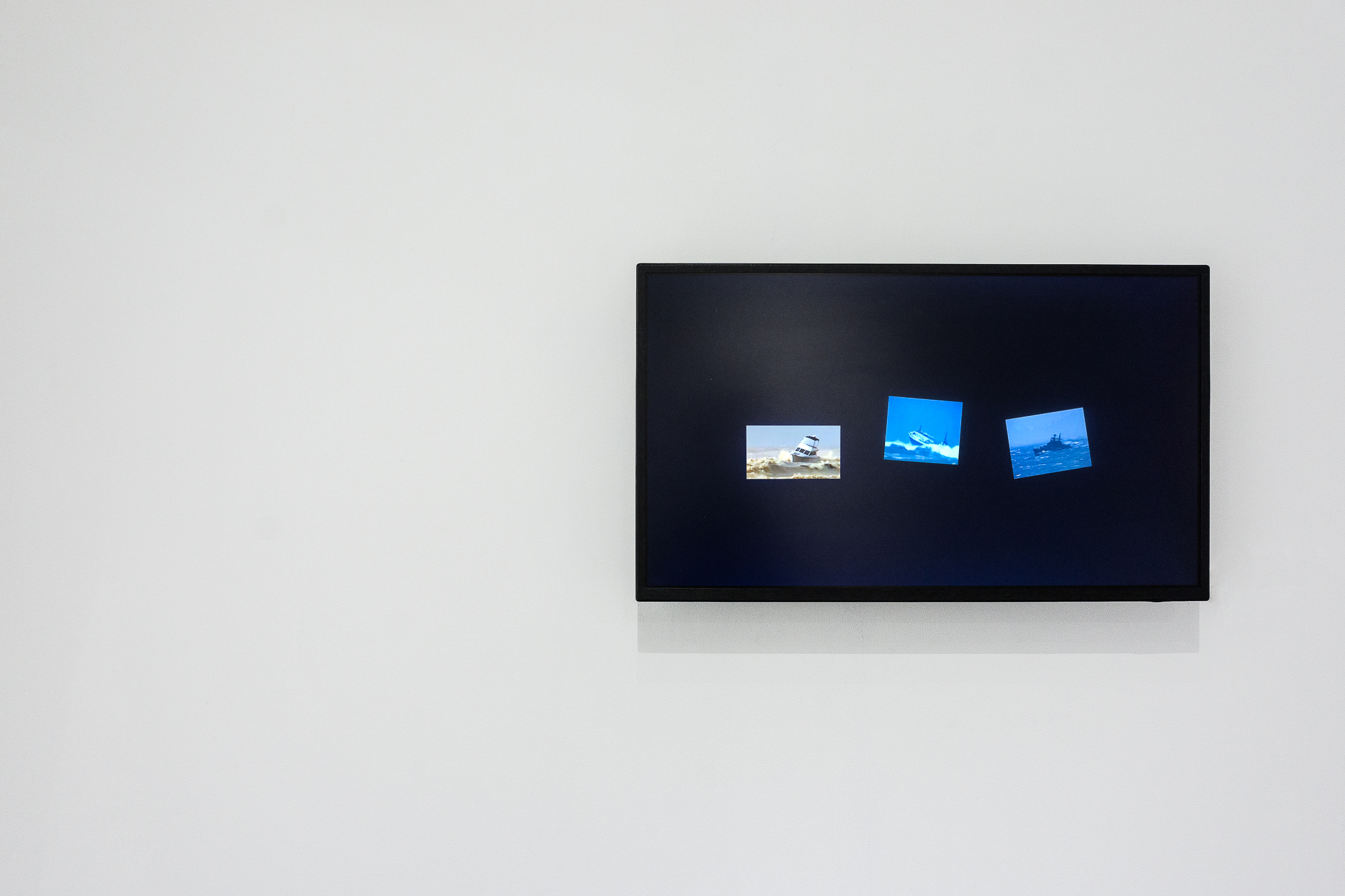 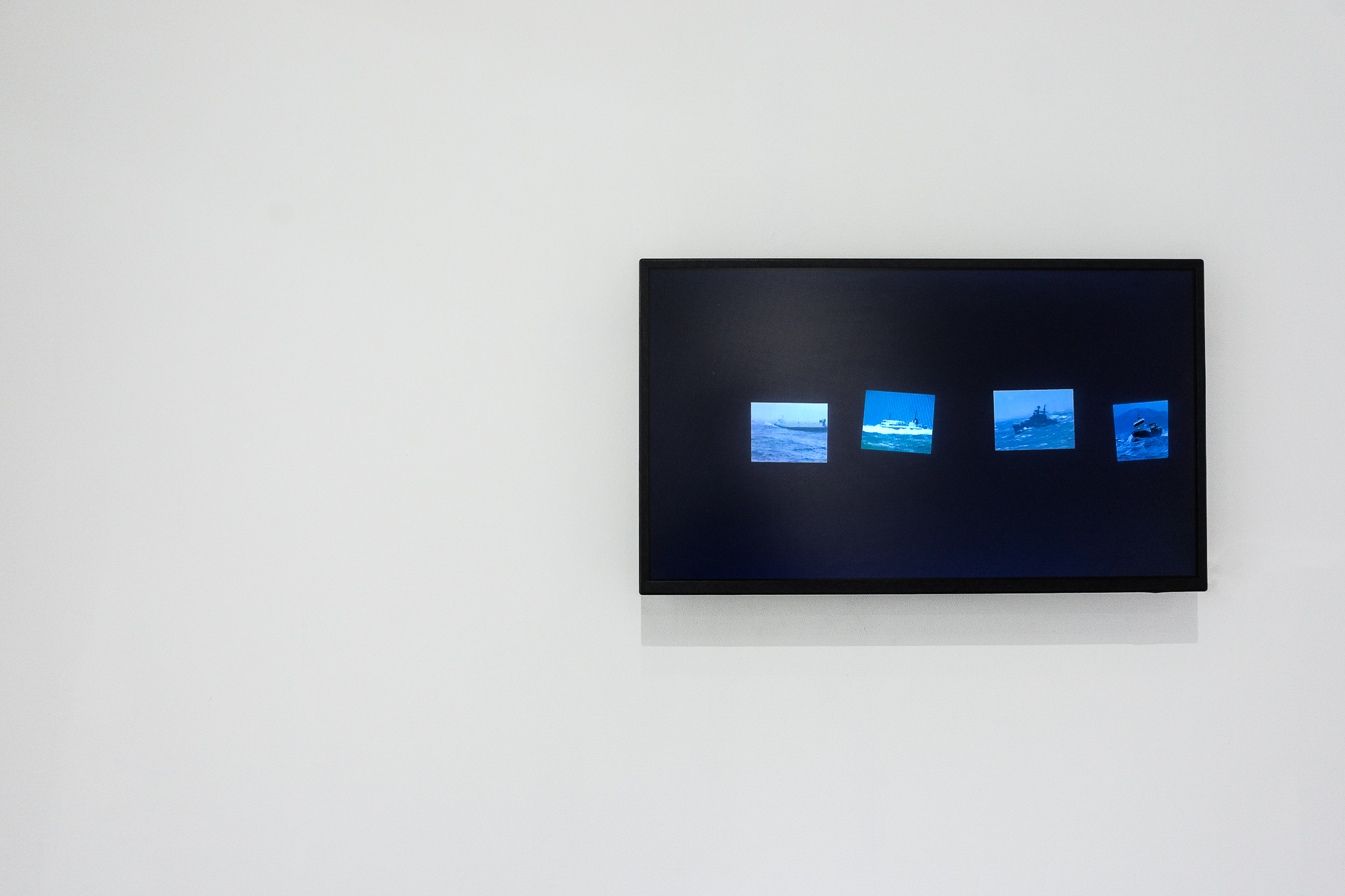 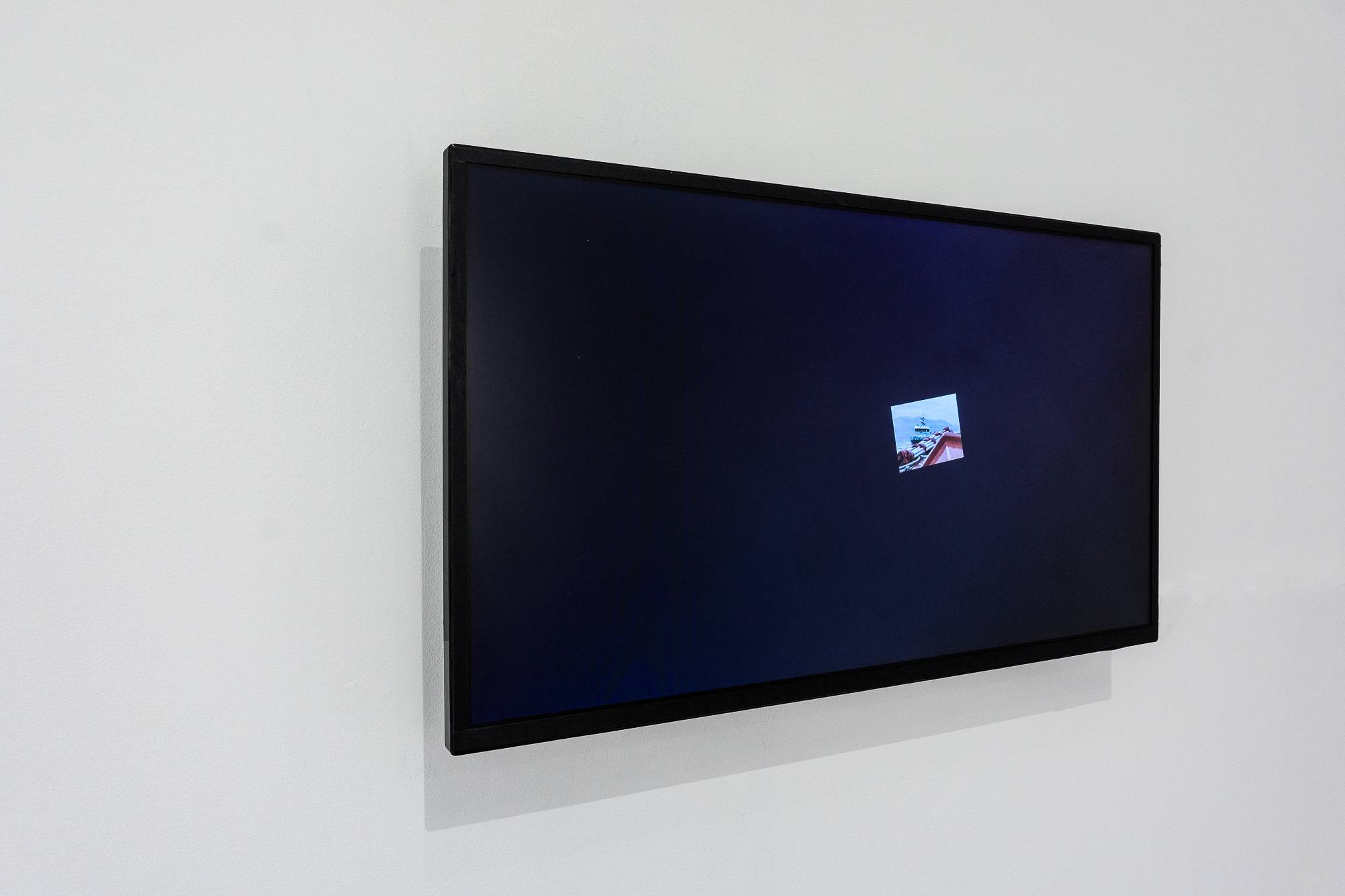 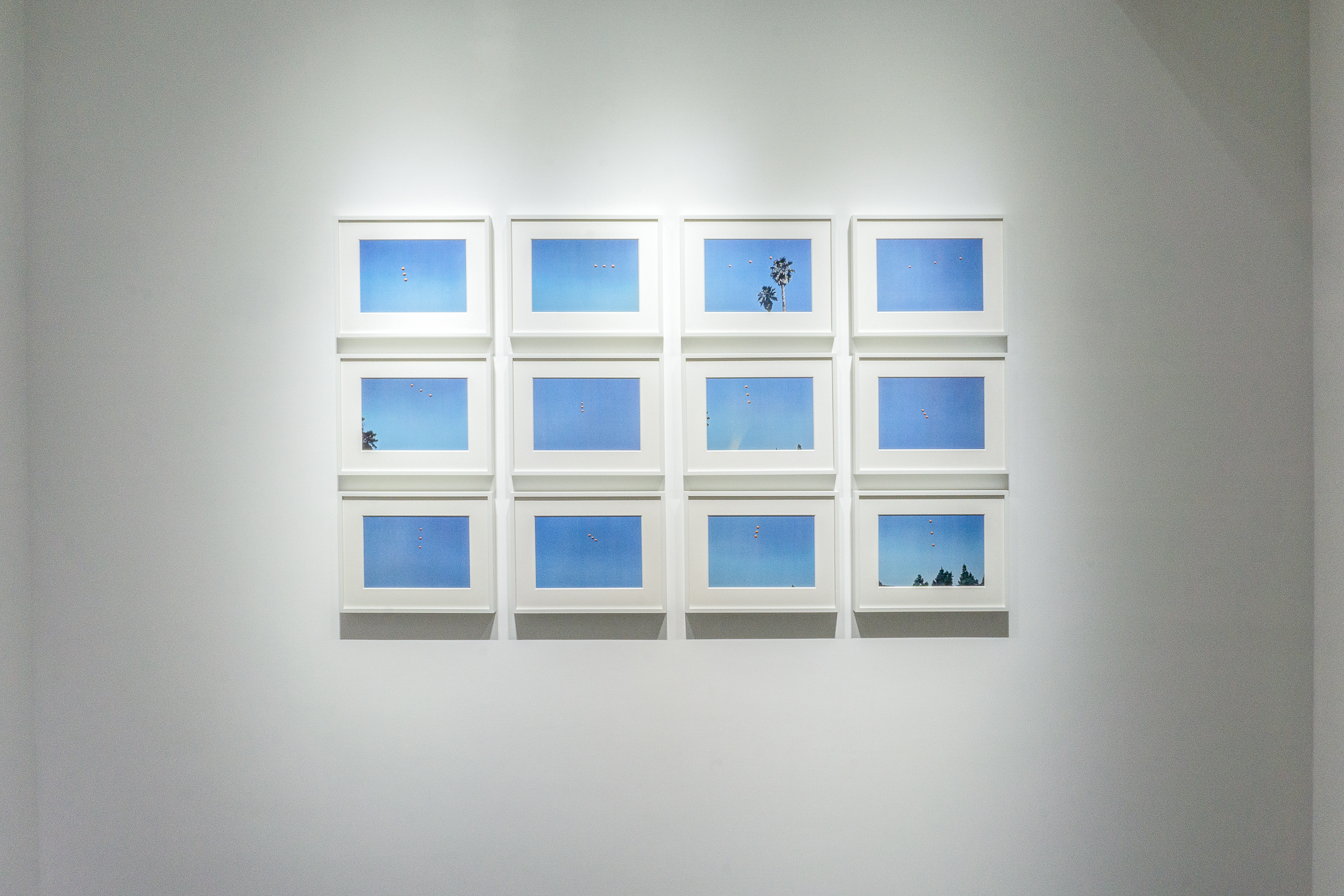 “On a typically overcast summer's day in 2014, I trawled the internet looking for something meaningful and came across high-resolution JPEGs of John Baldessari's Throwing Three Balls in the Air to Get a Straight Line (Best of Thirty-Six Attempts). Such was Baldessari's influence on my own work that the urge to realign his balls was irresistible. So with heavy grey clouds filling the sky outside my Manchester studio, I did just that?”


Presented from 12 February to 2 April 2022 (extended to 9 April 2022) at the Jean-Kenta Gauthier / Odéon Gallery, the exhibition Mishka Henner, Double Six (feat. Duncan Wooldridge) pays homage to the Californian conceptual artist John Baldessari (1931-2020) and humorously questions how photography and the world can rely on chance.

Rearranging Baldessari's Balls in a Straight Line (First Attempt) (2014-2021) consists of a group of 12 photographs in which three balls appear perfectly aligned in the air each time. With this series, Mishka Henner (b. 1976, lives in Manchester) appropriates Throwing Three Balls in the Air to Get a Straight Line (Best of Thirty-Six Attempts) (1973) by John Baldessari. If Baldessari threw three balls into the air in the hope that the camera would capture them in a straight line in the sky, and then retained the best twelve attempts on his thirty-ten exposure film, in 2014 Mishka Henner spent a few minutes rearranging all the balls in the original photographs into a straight line. Using high-resolution scans and digital retouching software, he fulfilled Baldessari's wish on the first attempt. But in doing so, he simultaneously destroyed the fundamental idea contained in the work: Baldessari would later claim that the difference between the alignment projected in his mind and the final result was a metaphor for the frustrating gap in any artist's mind between the conception of a work and its realisation, as well as for chance in creation. In contrast, Henner's gesture suggests that technology offers the illusion of a perfect world in which Baldessari's balls are all perfectly aligned and no mistakes are possible. Any idea of chance dear to Baldessari, who himself referred to Marcel Duchamp's 3 stoppages (1913-1914) or 'standards of chance', is thus reduced to nothing by Mishka Henner.

Calming The Storm (2016) consists of a one-minute film in which six ships, caught in perilous waves, avoid sinking thanks to a video montage that reduces the swell and stabilises the boats. The title refers to the biblical parable of the miracle of the calmed storm, when Jesus Christ saves mankind caught in the tumultuous waves of their existence and teaches them to have faith. In 1970, John Baldessari wrote: ?Make up art fables. Be a good teacher like Jesus.? In Calming The Storm, Mishka Henner believes in his destiny and makes a video montage that is salutary for the poor ships that we all are: here technology allows for survival, in contrast to Rearranging Baldessari's Balls In a Straight Line (First Attempt), in which technology seemed to cut off all perspective.

Even if an artist thinks he is God, his immortality would be best assured by a book dedicated to him by Hans-Ulrich Obrist. In 2014, during the opening of an exhibition at the Victoria & Albert Museum in London in which Mishka Henner was participating, a friend rushed over to warn him that he had spotted the critic discussing his work with an exhibition curator. The only words he heard were: "Mishka who? (2016), lacquer on wood, follows the format and typography of the collection "documents" published by JRP|Ringier and Presses du réel, in which Hans Ulrich Obrist has dedicated a volume to the history of curating. This work by Mishka Henner, as small in size as it is large in its self-mockery, reflects the self-referential world of contemporary art with which the artist has been playing for many years, beginning with a cycle of works appropriating recent canons of art history: Robert Frank, Robert Rauschenberg and Willem de Kooning in Less Americans (2012), Gerhard Richter and Ed Ruscha in Richtered (2012), Ellsworth Kelly in Sight Seeing (2021), and so John Baldessari in the portfolio. With Mishka Who?, Henner goes beyond the homage to an artist to insert himself ironically into an art history that sometimes devotes a place to the insignificant and the non-event.

Photo Dice (Zen for Photography) (2020) by artist and curator Duncan Wooldridge (b. 1981 in the UK, lives and works in London), invited by Mishka Henner, questions our relationship to chance and control in photography. These 'photographic dice' allow the participant to be relieved of all decisions relating to the technical parameters of the shot: shutter speed, aperture, orientation, depth of field and exposure. The work concludes the exhibition: these dice reintroduce the possibility of play and chance that Henner cancelled out in Rearranging Baldessari's Balls In a Straight Line (First Attempt), and the visitor will enjoy associating his divine hand with the omnipotence of the saviour in Calming The Storm.

On the occasion of Mishka Henner, Double Six, an exhibition that is both contemplative and interactive, we are please to announce the release of Mishka Who?, a silent artist's book consisting of 256 empty pages, in contrast with a world awash with technology where commentary and anecdote are elevated to the status of events.