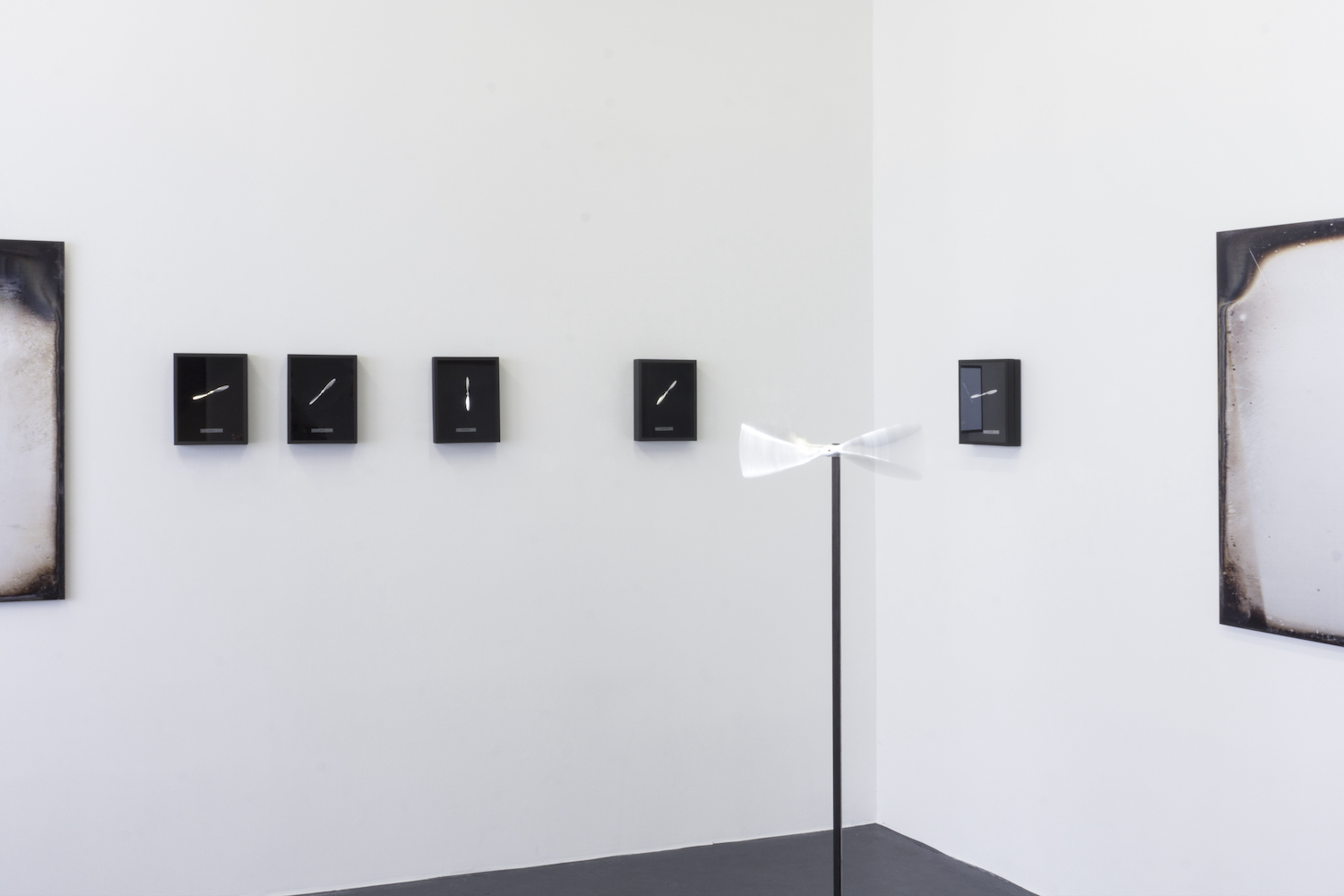 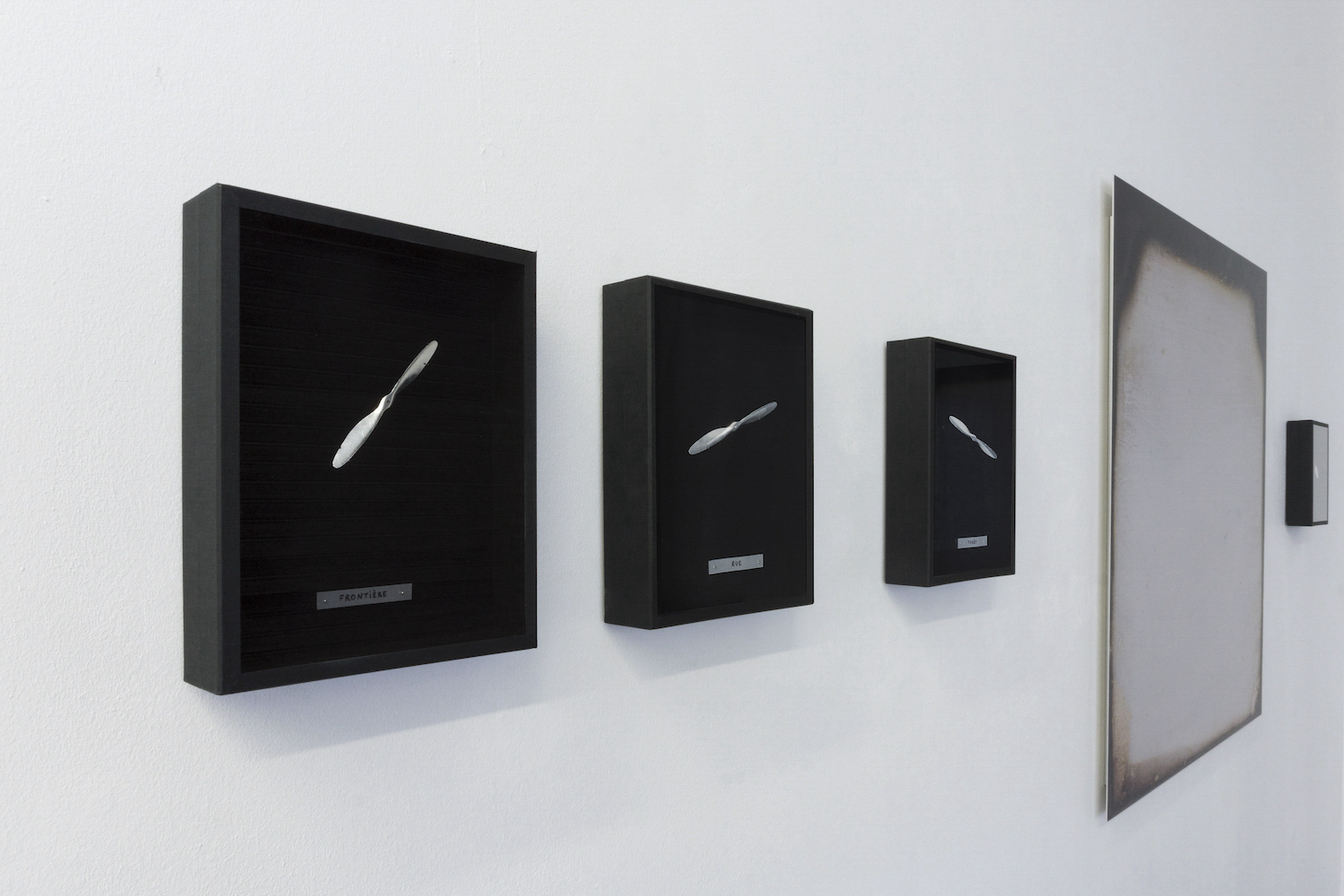 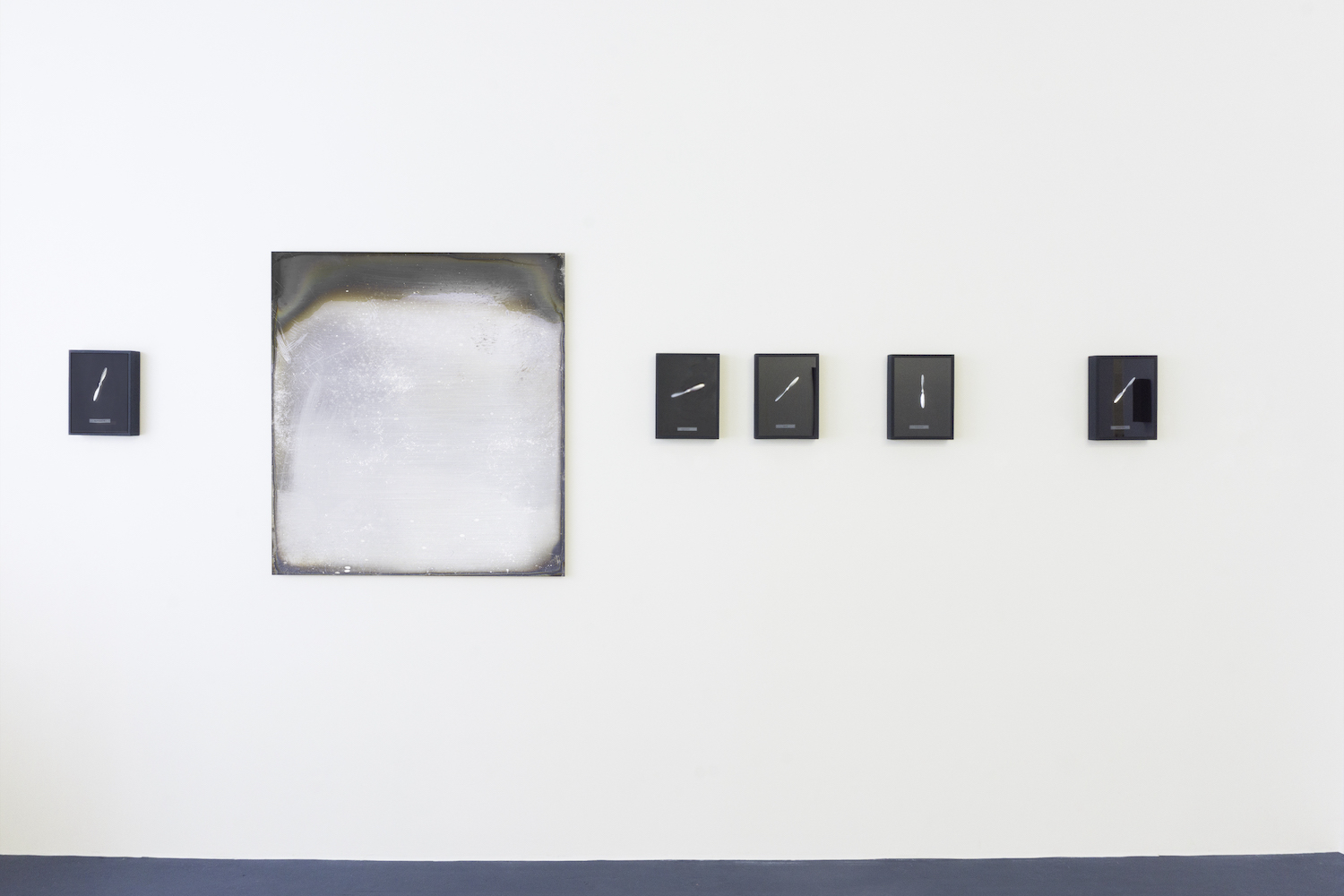 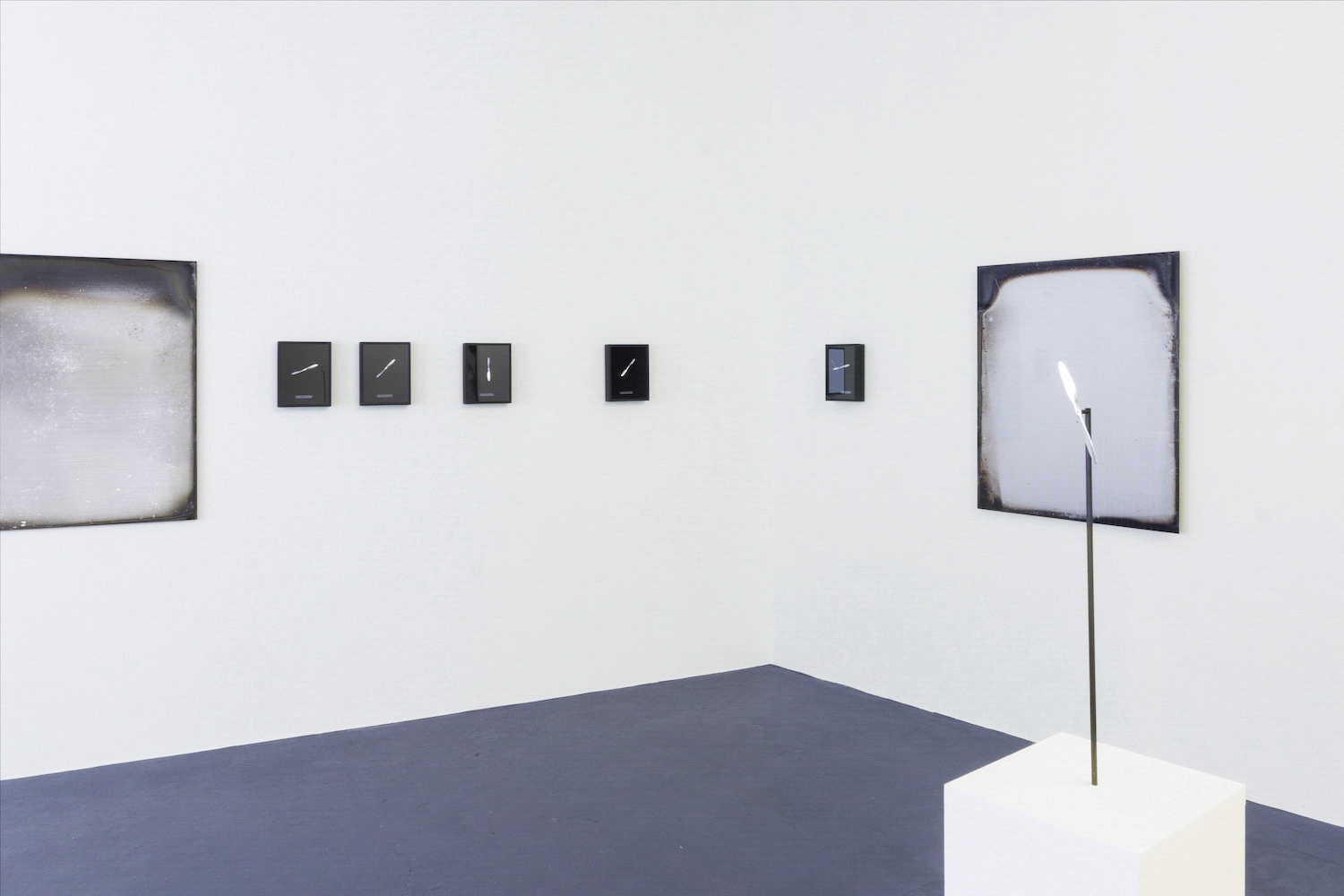 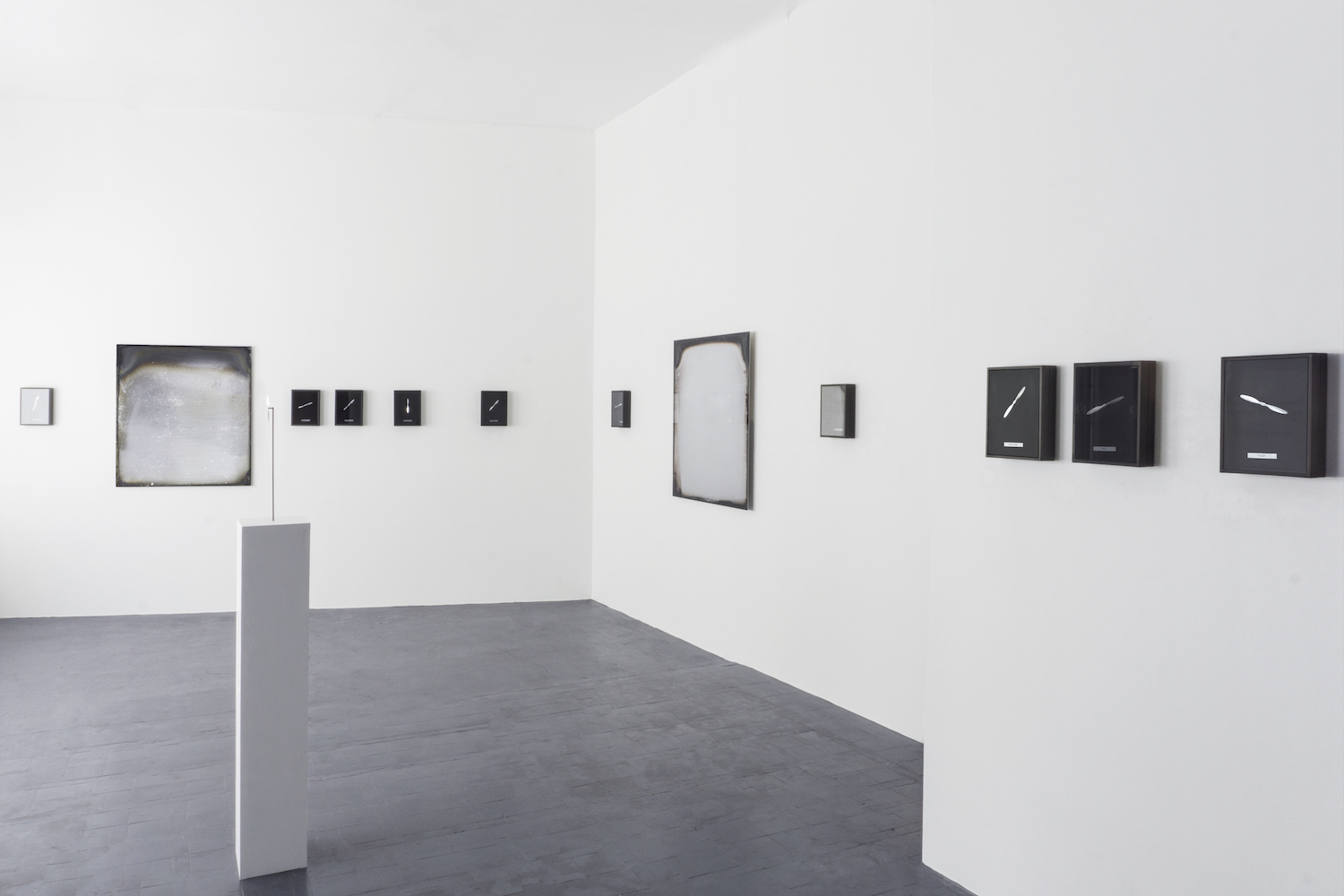 Presented from 11 June to 30 July 2022 at the Jean-Kenta Gauthier / Vaugirard gallery, the exhibition Taking Time brings together works by Raphaël Dallaporta (born in France in 1980, lives in Paris) and Hanako Murakami (born in Japan in 1984, lives in Paris) which invite visitors to reconsider their relationship to time and space.


Fossils of light and time

For two decades, Raphaël Dallaporta has been developing a body of work that invites contemplation, slowing down, and the search for that feeling of "being in the right place at the right time", as the artist likes to repeat. Freeing himself from the documentary to embrace the movements of the world and the relationship we have with it, Raphaël Dallaporta has been conceiving since 2015 the idea of the Air Current Sculptures (2022) presented in the exhibition. The result of this slow research consists of sculptures made of small propellers which, after having rotated in various places under the effect of air movements, are presented inert in entomology boxes, like inanimate objects and preserved in a protective case.

Presented at the Rencontres d'Arles (2019) and at the FRAC Normandie (Rouen, 2020), Hanako Murakami's The Immaculate (2019) series are four large-format photographs, enlargements of unused daguerreotype plates dating from the 1850s and preserved throughout in their original boxes. Small size tin plates coated with silver emulsion, daguerreotypes were the first photographic process commercialized in France. Conceived as part of the artist's research into the history of photography, these enlargements reveal numerous marks of oxidation and various reactions of the metal surface that seem to constitute traces of the passing of time. As a medium for a photograph that never took place, Hanako Murakami's Immaculate nonetheless shows many layers of time, like "fossils of light and time" according to Daido Moriyama's definition of photography.

Harbour, school, street, forest, border: Raphaël Dallaporta has chosen a dozen generic places of universal significance for his Air Current Sculptures, significant in the life of the artist and of each individual, and in which the movement of air seems to be the beginning of an answer to the question asked by French writer Georges Perec: "What really happens, what we live, the rest, everything else, where is it? What happens every day and what comes back every day, the banal, the everyday, the obvious, the common, the ordinary, the infra-ordinary, the background noise, the usual, how can we account for it, how can we interrogate it, how can we describe it?" (Approaches to what?, 1973). The only mobile propeller in the exhibition, mounted on a pedestal, rotates under the effect of the air currents generated by the configuration of the place and the comings and goings of the visitors, and will constitute, at the end of the exhibition, the air current sculpture of an art gallery. The sculpture is thus not the shape of the air captured in a given place, but the metaphor of the time lived in a given place. And in front of each work, the viewer sees his or her own reflection in the glass, as an invitation to project themselves into the place represented.

Hanako Murakami writes about The Immaculate: "While waiting for the moment to capture the image, this smooth surface has been kept intact, in a dark box. A century has passed. The accumulation of darkness in this cold surface seems to have turned into light." The artist also sees accumulations of potential images that have not taken place. Thus beneath the surface, The Immaculate harbours "a mental image - the one that every photograph contains in its latency", as Pascal Beausse wrote for Hanako Murakami's exhibition at Rencontres d'Arles in 2019. Mysterious objects bearing almost ghostly traces, these enlargements of old mirrors that make up The Immaculate also allow the silhouette of the viewer to emerge, plunged into the dizziness of time.

If Marcel Duchamp described the propeller as the unsurpassable horizon of the work of art during a visit to the Exposition de la Locomotion Aérienne in Paris in 1912, Raphaël Dallaporta here rehabilitates the propeller for what it carries within it: the memory of the place that animated it. By setting up these anemometers that record nothing, Raphaël Dallaporta has imposed on himself periods of pause during which, waiting for the air current, he has, in his words, "made himself a sensor, an ultra-sensitive receiver of all phenomena".

These sculptures, which resemble portraits of our places, also question the photographic dimension of Raphaël Dallaporta's work. For two decades, the artist has been developing a body of work whose photographic practice is based on protocols defined upstream so that the act of taking the photograph does not overshadow the contemplation of the moment. This is how he produced the projects Chauvet-Pont d'Arc: The Unappropriable (2016) or Ruins (2011) (for which the drone designed by the artist to fly over Afghan territory was already equipped with small propellers), while the large pastel Course (2021) presented a few months ago at the gallery was another invitation to slow down. Raphaël Dallaporta's work takes up the challenge of preserving the photographic by relating a fundamental relationship to the world and to time, without reducing this dimension to the so-called decisive act of the instantaneous. All of this while striving to question this time that constantly eludes us, so that the very title of the exhibition "Taking Time" is both an invitation to contemplation and an aberration due to our utilitarian approach to time.

By not having photographed anything, Hanako Murakami's plates question the notion of index in photography. If any photograph should have a space and a time as its referent, The Immaculate opens the way to a new temporality, that of the photographic object which, not for 1/125th of a second, but for 170 years has slowly recorded the passage of time. Until the artist intervenes and puts an end to this duration. In this sense, these works seem to have freed themselves from the representation of a time and a place, as if they were the result of the absence of any decision.


With Air Current Sculptures and The Immaculate, Raphaël Dallaporta and Hanako Murakami free themselves from the instantaneous, the event, the spectacular, and show us how, by taking time, the latter can be represented.