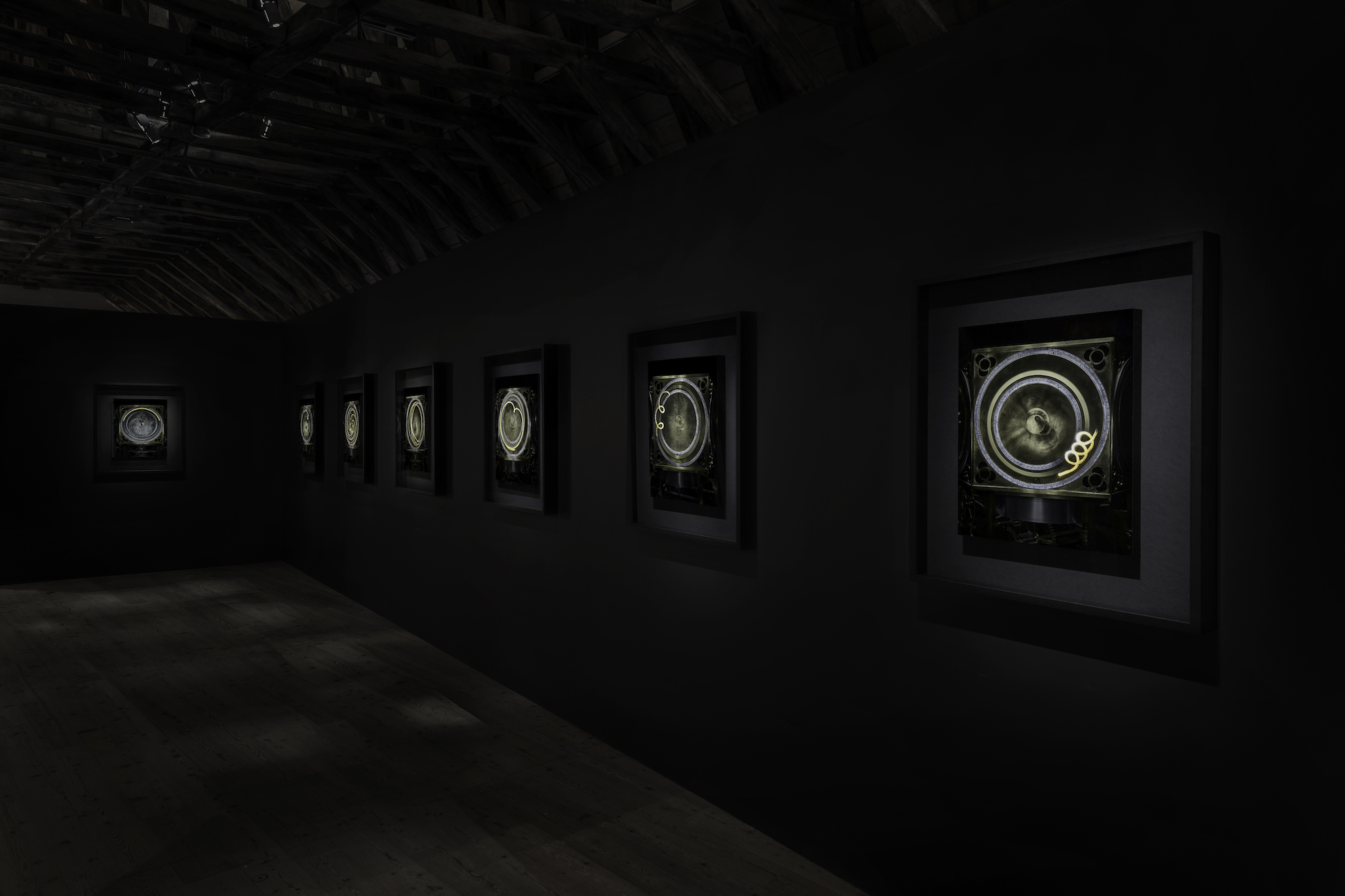 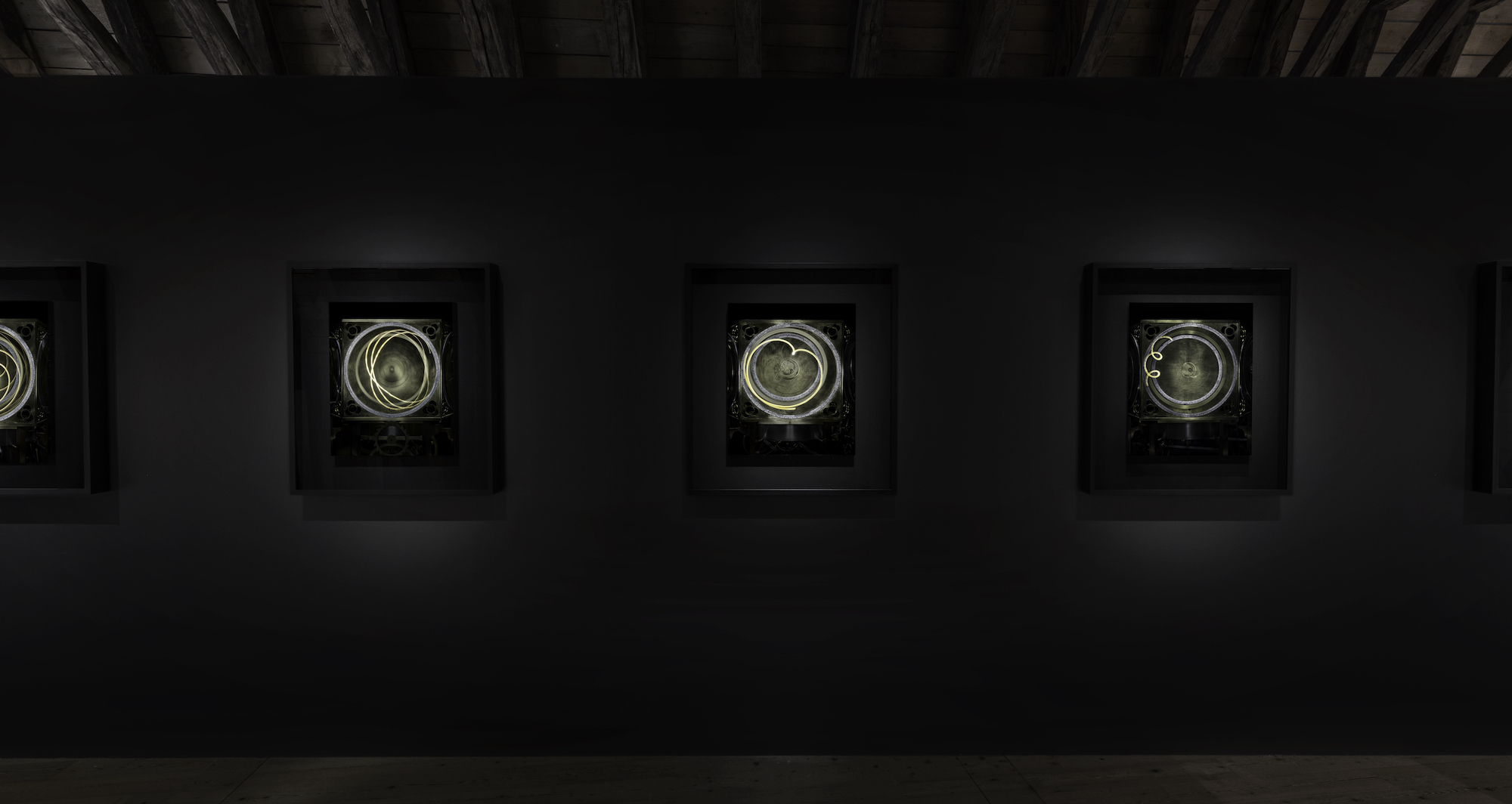 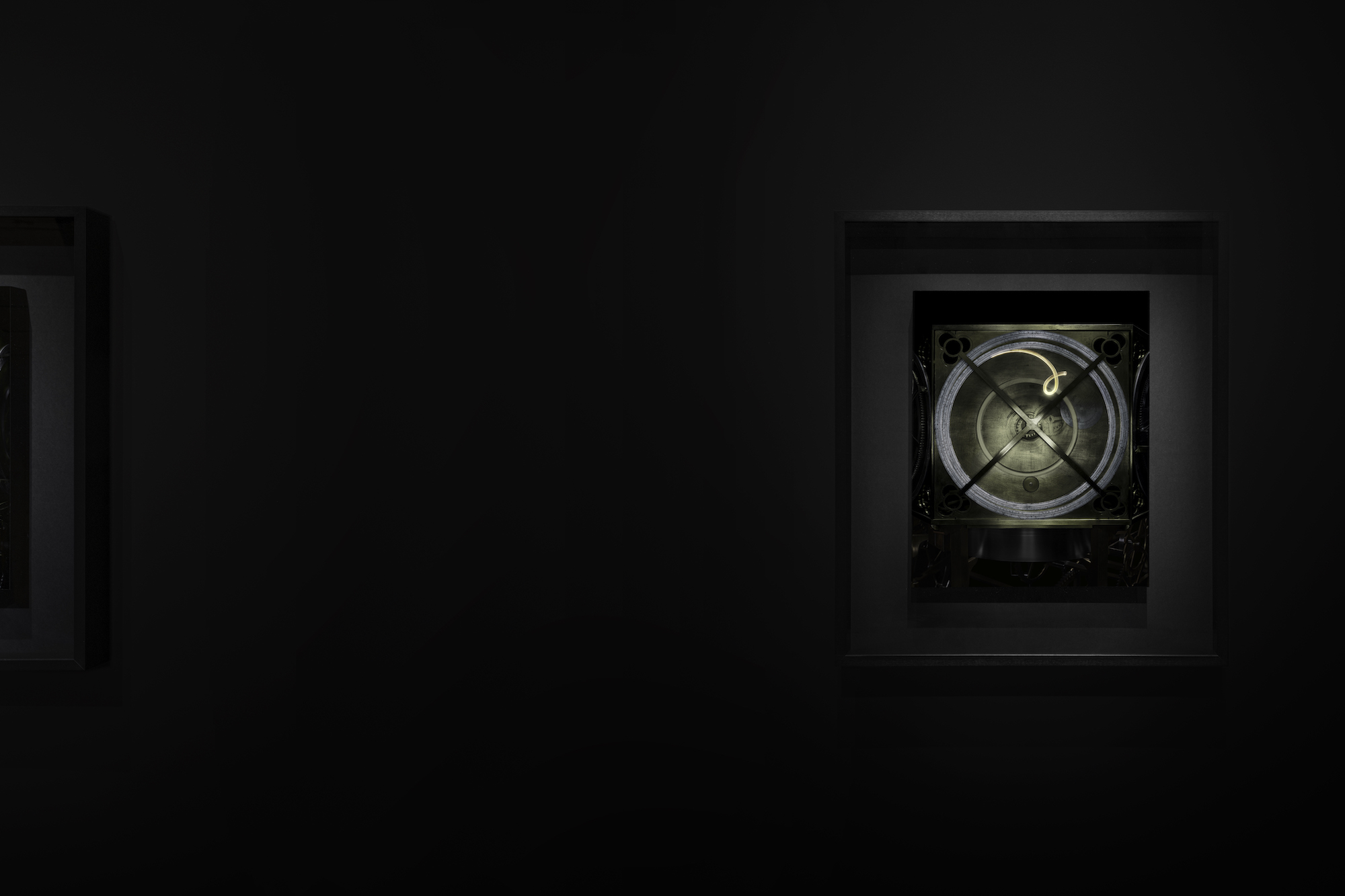 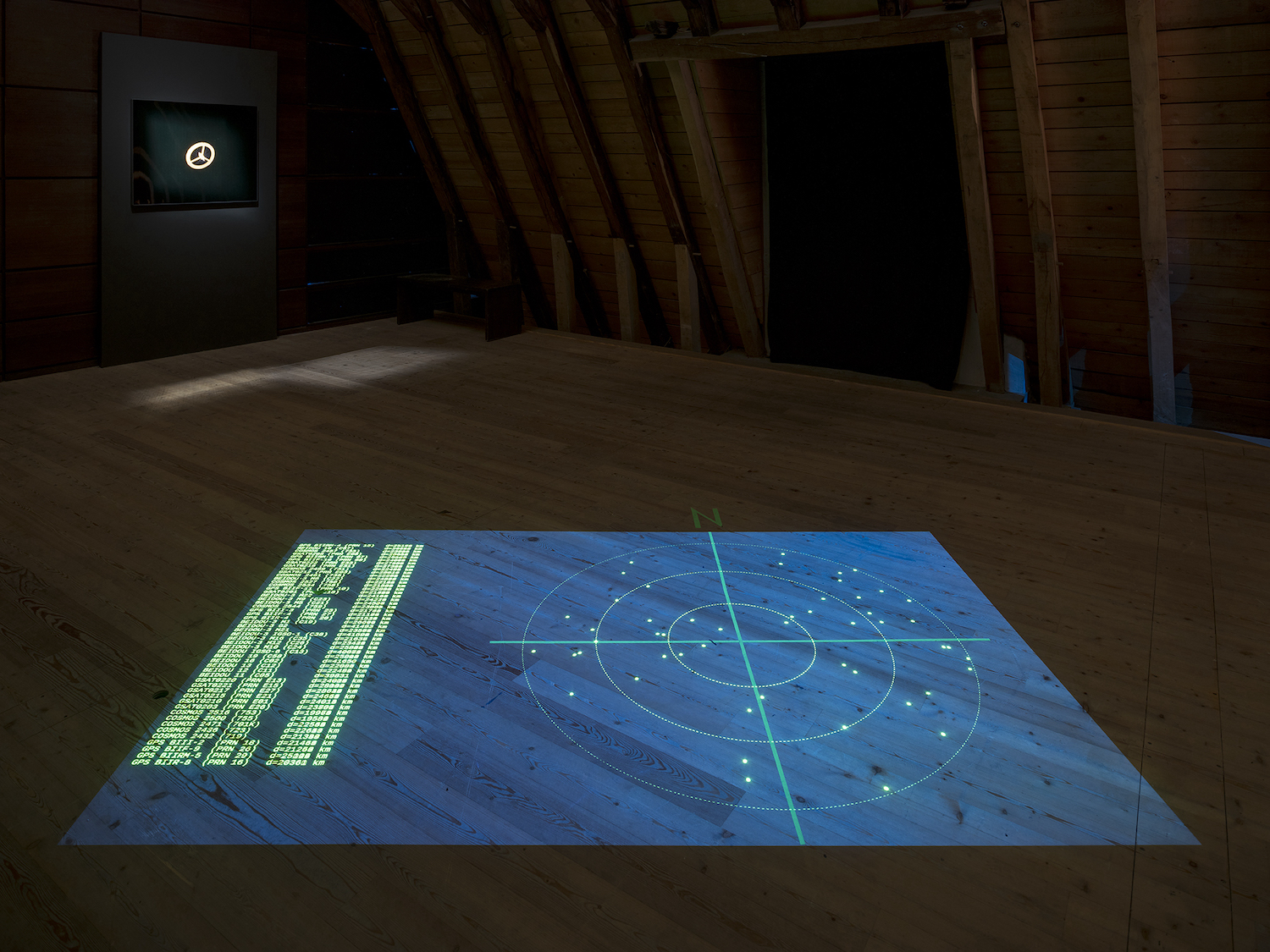 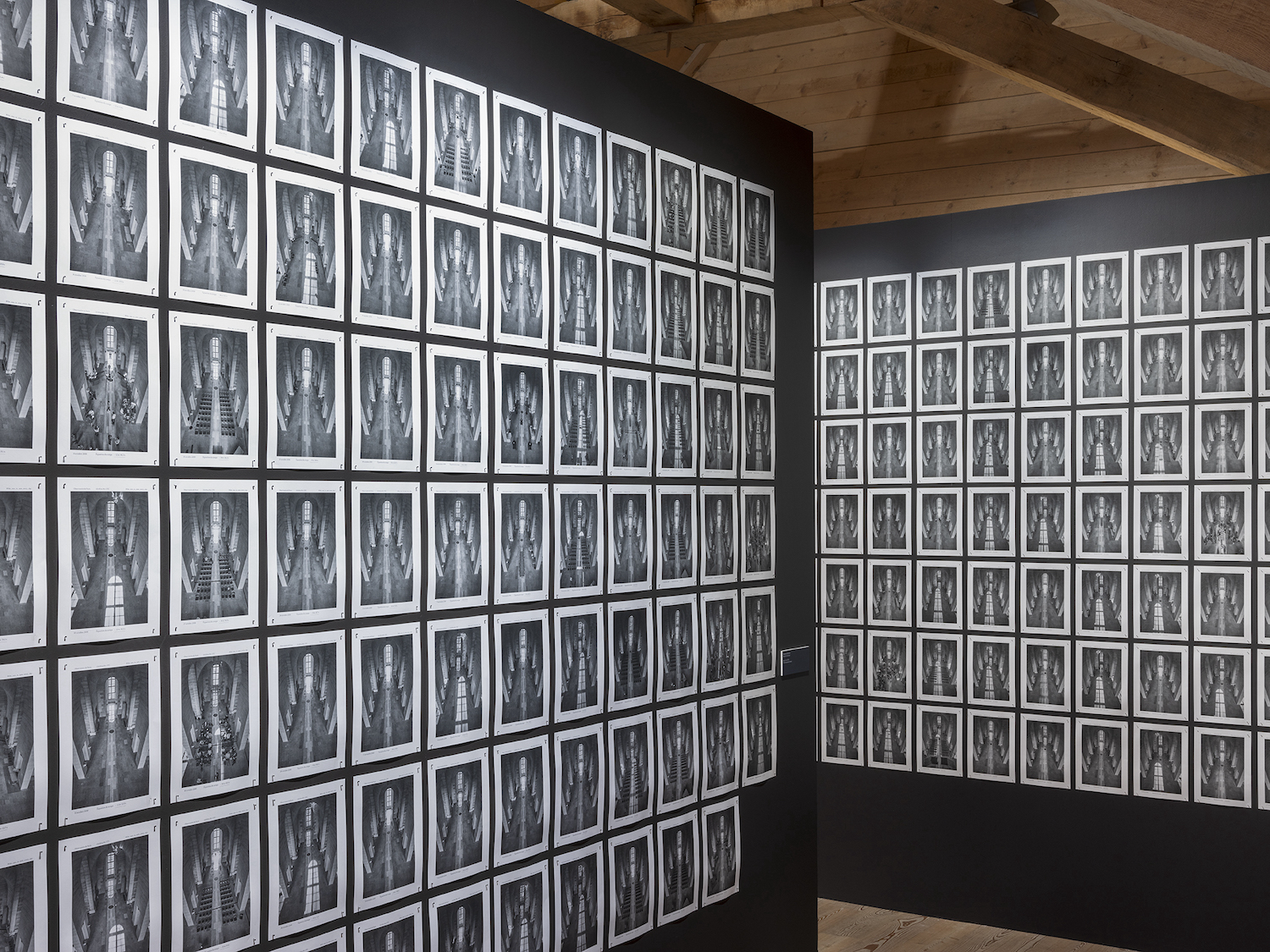 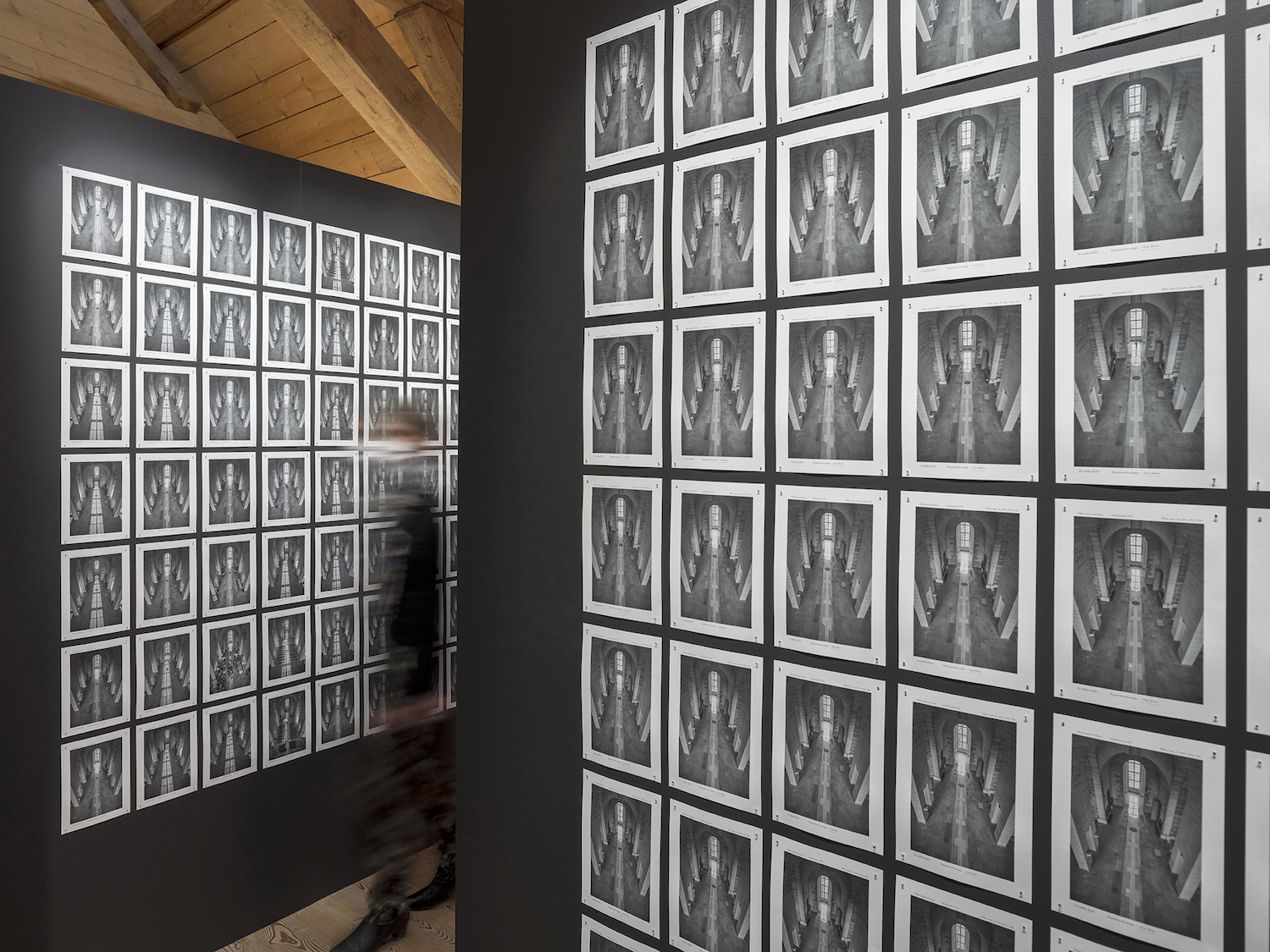 As part of the group exhibition Transmissions. L'immatériel photographié presented at the Musée du Temps in Besançon in collaboration with the Musée International d'Horlogerie (La Chaux-de-Fonds, Switzerland), Raphaël Dallaporta presents a group of 3 projets under the title Mouvements du Monde.

Completed in 1380, Dondi's original clock was considered a new wonder of the world at the time, admired by the powerful of his time, such as Charles V. Disappeared in the 16th century, it was the subject of several replicas, including the one in the Musée International d'Horlogerie in the mid-1980s, based on the original manuscript preserved in Padua for over six centuries. The author of the Astrarium, Giovanni Dondi (1330-1388), spent fifteen years working on this extraordinary clock, which mechanically materialised Ptolemy's geocentric system (2nd century), making it possible to calculate the positions of seven stars at any time of the year.
The seven photographs made by Raphaël Dallaporta are recordings of the movement of each star on the corresponding dial: the Sun, Mercury, Venus, the Moon, Mars, Jupiter and Saturn. In collaboration with Masaki Kanazawa, a restorer at the MIH who operated the stars manually, the artist has created a lighting of the dials, thanks to relatively long exposure times. The light thus draws loops with a particular appearance - the planets seem to move backwards from the Earth in order to move forwards, a phenomenon known as retrogradation which has obsessed generations of astronomers, and which Raphaël Dallaporta translates into a metaphor for the non-linear advance of progress.

This experimental installation invites us in turn to experience another movement, the passage of artificial satellites over our heads. In a video projection on the floor, the orbits of the navigation satellites passing in the sky visible from the Musée du Temps are made perceptible. This virtual radar, designed in collaboration with Frédéric Meynadier using data from NORAD, the North American Aerospace Defense Command, projects the coordinates of the selected satellites (GPS, Galileo, Glonass, Beidou) onto a map of the sky.
In real time, the four satellite constellations (American, European, Russian and Chinese), synchronised by atomic clocks to facilitate our movements, are represented here by the trajectory of a point from its entry into the area of the sky that concerns us. This video installation thus refers us to the saying of the Danish astronomer Tycho Brahe (1546-1601): "Suspiciendo Despicio, Despiciendo Suspicio" (when I look up I look down and when I look down I look up). By tilting our gaze, it allows us to observe in turn the satellites that guide our movements.

Equation of Time is the result of the daily measurement experiment initiated by Raphaël Dallaporta at Paris Observatory with the researchers of SYRTE, Systèmes de Référence Temps-Espace. Every day at 11h50min39sec UTC (Coordinated Universal Time), thanks to an automated protocol, a snapshot is taken of the image of the Sun on the floor of the Cassini Room. Since 1671, this room has housed the Paris meridian, an instrument that measures the variation in height of the Sun over the year. As it passes through an eyepiece in the south face of the Observatory, the Sun projects its image on the floor, a luminous spot that moves with the days and seasons.
Superimposing all the images over the year reveals a "figure of eight". This is the result of a phenomenon known since antiquity, the equation of time. This is the difference between average noon and true noon, in other words, between the convention of regular 24-hour days and the time of the Sun, which varies during the year and makes the length of each day different. Equation of Time is a renewed invitation to the contemplation of the world's movements by which Raphaël Dallaporta reminds us, in the words of Heraclitus, that "the Sun is new every day".